M. P. Robinson,Thiery Guillemain Oct 22, 2021 M. P. Robinson,Thiery Guillemain
The Leclerc is the only battle tank serving in operational combat units in the French Army. Designed as a Cold War era tank killer that could take on numerically superior enemies, the Leclerc has served the armies of France and the United Arab Emirates for over twenty years. Since 1989 when the first Leclerc prototype appeared, it has been counted amongst the world s most complex and deadly AFVs. Despite its fame, relatively little has appeared on the Leclerc in English, and much of the information about the Leclerc on the web is incorrect. Even in French, it has been ten years since the Leclerc was studied in a published work. Char Leclerc by MP Robinson and Thierry Guillemain is a survey of the Leclerc s development and service in the French Army right up to the present day.  It explains the differences between the eleven Leclerc production batches produced for the French Army, the different Leclerc derived vehicles, and the changes that have transformed the French armoured force since the Leclerc first entered service. This latest addition to the Kagero Photosniper seriesis illustrated with over 220 unpublished photographs and ten colour plates, making it an ideal reference for historians and modellers alike. 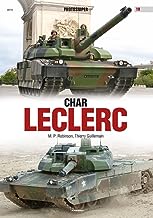